A Weeklong Buddhist-Catholic Dialogue in Rome 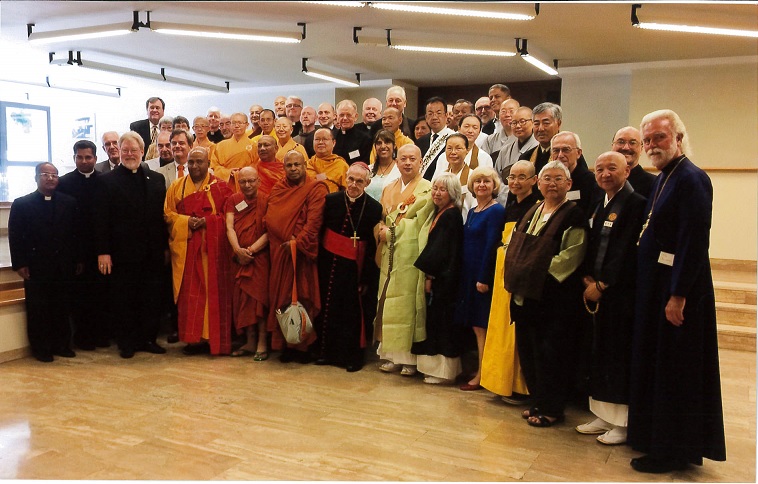 Venerables Guo-jiann  (Director of DDM Los Angeles Center) and Chang-Hwa (Director of Chan Meditation Center, NY) participated in the “Catholic-Buddhist Dialogue on Suffering, Liberation, and Fraternity” from June 23 to 27, 2015, at the invitation of the United States Conference of Catholic Bishops (USCCB) and the Pontifical Council for Interreligious Dialogue (PCID). The Dialogue was held at the Mariapolis Centre, a Rome venue of the Focolare Movement. The Venerables were representatives for one of the many Chinese Buddhist traditions present at the event.  Other organizers of the Dialogue included the Focolare Movement, Monastic Interreligious Dialogue, and several U.S. Buddhist organizations, with Professor Donald W. Mitchell acting as liaison among the groups.

"After years of academic dialogues on mutual respect and understandings across faiths, the Pope requested a new one called 'Dialogue and Fraternity,' that would lead to fellowship resulting in social action," Mitchell said. This dialogue would build on past Buddhist-Catholic dialogues, which focused largely on developing mutual understanding. Other than a tour of the Vatican and an audience with Pope Francis on June 24, the agenda for the other days revolved around several subtopics.

The subtopics included these: Relational Suffering and Its  Causes; Liberation from Relational Suffering; Dialogue of Fraternity: Fraternity as a Path for Moving Forward; and Post-Dialogue Interreligious Collaboration, with emphasis on local collaboration. By conveying the seeds of interreligious dialogue back to local U.S. communities, it was hoped that the meeting’s goals would begin to be realized. His Eminence, Jean-Louis Cardinal Tauran, in his keynote address, also encouraged participants to realize peace by being healers and reconcilers in their communities.

Forty-five Catholic and Buddhist interreligious and social action leaders from the U.S participated in this meeting, half of them Catholic and the other half Buddhist. They came from five large U.S. cities: New York City, Chicago, San Francisco, Los Angeles, and Washington D.C. Major Buddhist communities in the U.S.—of the Sri Lankan, Thai, Cambodian, Vietnamese, Tibetan, Chinese, Korean, Japanese, and Tibetan Buddhist traditions—were all represented.

Cardinal Tauran, President of the PCID—the central office of the Catholic Church for promoting interreligious dialogue in accordance with the spirit of the Second Vatican Council—compared the Buddhist-Christian dialogue to an “inner pilgrimage.” He invited participants on this journey to “take less baggage” by overcoming prejudices, wounds and fears, and to “cross borders,” be they cultural, religious, ethnic, or linguistic, in order to know, understand, and respect one another.

In the mornings, the Buddhist participants led morning service and meditation—the various traditions taking turns each morning—and the Catholic participants led Mass. For about two hours in the afternoon, participants held discussions in groups divided by geographical communities. They shared approaches for specific collaborative projects to address social ills within their communities locally. Important points from the discussions were recorded and summarized. These were at once the tangible fruits of this meeting and a response to the various societal problems facing the U.S. today in the form of an action plan. A summary will be presented to Pope Francis for review.

Each day’s main session had a moderator and four to five speakers, most of whom were both doctrinally learned and deeply informed by experiences from practice. On the twenty-fifth, Venerable Chang-Hwa delivered a paper under the session “Liberation from Relational Suffering.” She shared that people can put Dharma into practice and lessen their vexations by protecting and cultivating their spiritual environment. Other examples of putting Dharma into practice include learning to deal with desires, to handle problems, and to interact with others in a clear-eyed and positive way. Dharma Drum Mountain has organized such approaches to practice and presented them as part of the “Fivefold Spiritual Renaissance Campaign.” The Venerable also described modernization of liturgical services, such as the Great Compassion Water and Land Assembly, by incorporating digital technologies, and monastics involvement in promoting sustainable and organic farming.

Invited to address the assembly on behalf of the Buddhist participants at the closing ceremony, Venerable Guo-jiann thanked the sponsoring organizations, and affirmed that this program of dialogue created a valuable interreligious platform. It planted the seeds for “Fraternity and peace” dialogues to take root and develop in the U.S. and around the globe. The Venerable also shared a passage from Venerable Master Sheng Yen’s “Global Ethics,” which emphasized seeking common ground while preserving individual identities. She hoped future dialogues would continue to be conducted with such show of mutual respect.

On the twenty-fourth, participants met with Pope Francis, who warmly greeted and shook hands with each one. He told the participants that in this world filled with disagreements, those in attendance have consistently made an effort to explore how to cooperate. The Pope said: “This has been a forum of fraternity, dialogue, and friendship. This is beneficial and healthy. Even though at this very moment, there are some who are still harmed by wars and hatred, our modest interactions represent seeds of peace and love. Thank you all! And may God bless you!”

With blessings and support from Pope Francis, we hope interactions between Catholics and Buddhists will grow closer. Dharma Drum Mountain presented to the pontiff a gift of scrolled calligraphy “Great Light” by the organization’s founder, the Venerable Master Sheng Yen. A scroll of calligraphy “Wish-Fulfilling Avalokitesvara” was separately presented to the organizer the PCID in the course of the meeting. 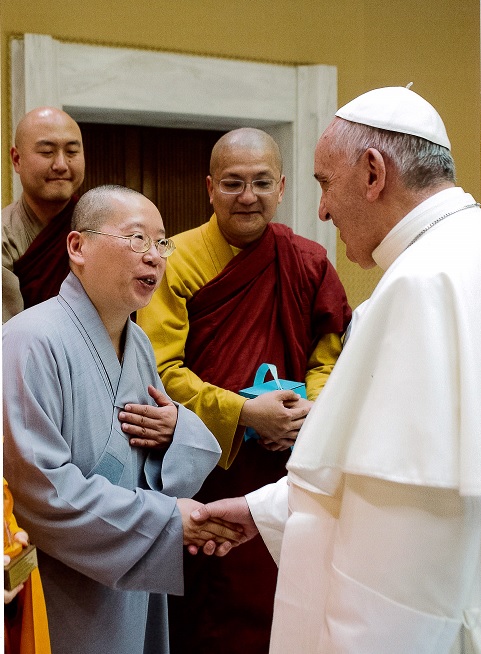