Summer Camp: Going with the Flow 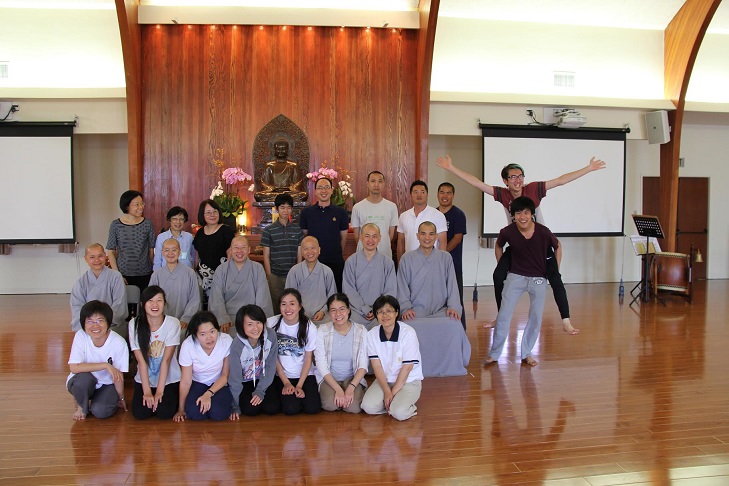 A two-day youth camp led by Buddhist monastics was offered by Dharma Drum Mountain Los Angeles Center (DDMLAC) in the summer of 2015. Open to all young people (aged 18 to 35) of the L.A. area who spoke English as their native language or communicated primarily in English, this was the first camp of its type offered by the Center. Some within the younger generation of the region’s large Chinese community may be relatively unfamiliar with their cultural heritage, which has been influenced considerably by Chan Buddhism, and vice versa. The camp offered an opportunity for this population, as well as all interested young people, to explore both traditions. It also presented a unique culture- and mindfulness-based alternative to the many other summer camps on offer.

Venerable Guo Yuan, Dharma Drum Mountain’s Director of the Chan Hall at its Taiwan headquarters, served as the instructor of this camp. He was assisted by the Center’s resident monastics and other monastics from Taiwan. A major focus of the camp was presenting meditation basics. Other activities included introducing histories and stories from Chan Buddhism as well as Buddhist etiquette and manners, practicing Chinese calligraphy, and sharing perspectives on life. Over July 3 and 4, 12 youth participants and three adult “auditors” attended. Although this was not a large number, even so it was not necessarily easy to offer a program that is both engaging and may also, perhaps, open a door to the ineffable.

Several participants were children of those who regularly go to the Center to practice. One parent, Ms. Chou, said that she wanted her daughter to learn a little about meditation, as the child begins college life out of state. This way, the mother felt, if her daughter ever faced personal or social problems, “she might have access to a few simple methods to find some peace of mind.” Another practitioner stated that as she found meditation and Buddhist practices helpful personally, she wished to offer her child a chance to be exposed to such practices at least, and “it was up to the child whether to continue such practices in the future.”

Young people who grew up in the West are often independent minded, and also prefer to engage interactively. Perhaps because they found sitting meditation dull, or because they saw little connection between their young selves and a catalog of monks of yore—even if those were masters venerated, already on the first evening, two participants expressed their desire to go home. Going with the flow, the monastic counselors altered their lesson plan the next day, asking the participants to photograph sceneries inside the Center premises, and afterwards share their approaches and ideas behind their creative impulse. From an engagement with these images and the process of capturing them, the counselors tried to elicit a hunt for the spirit of Chan.

Participants found “carrying a bowl of water” over an obstacle course and Chinese calligraphy more engaging. They were especially focused and serious when practicing phrases to be given to their loved ones, copying with their brushes the characters over and over. At camp’s end, more than a few moms and dads were taken aback by the surprisingly fine quality of the writing, but all were, unsurprisingly, grateful.

From this camp, the monastics noticed that the young participants were not unconcerned about life. The sharing by the young showed persistent exploration of life’s values and attentiveness to our larger environment. Though a few participants stated that they had positive experiences from meditation, most enjoyed the interactive activities and open sharing more. Meanwhile, the monastics and adults expressed that they had certainly observed a great deal at the camp, and what they saw gave them plenty to reflect on. It would a challenge, but also only a normal part of their practice, to find out how best to engage the young on Chan as a spiritual pursuit.