Making Tangyuan Together in the Happiness Years
BY CAREY NI, ANNIE KUO, AND TINA VAN 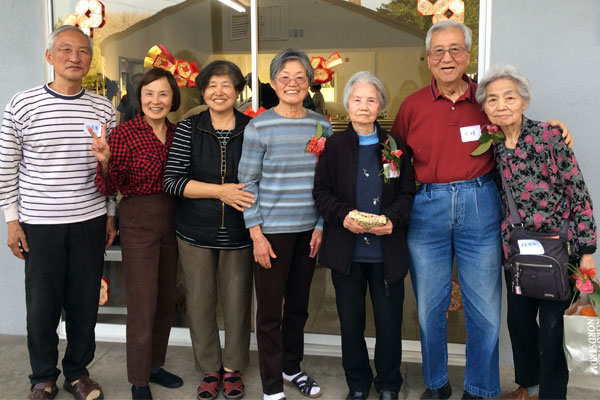 DDM LA Center hosted “Friendship in the Happiness Years,” a get together for older adults. The event was in English, Mandarin, and Cantonese and held several days after the 2016 New Year’s Day.

This special event was organized to foster connections among and with older Bodhisattvas (“pusas”), according to Rujie Huang, who coordinated the event. But it was open to people of all ages and all cultural backgrounds from the community. After consulting with Mori Yen of the Center’s food service group, event planners decided on a theme activity: to make tangyuan and mingle together as a family. The food service group helped prepare dough for the wraps in several colors ahead of time.

All three resident monastics of DDMLAC participated in and led parts of this special event. Venerable Guo-jiann, the Center’s Director, made welcome and closing remarks. Venerable Chang-Ju then instructed attendees on how to find “the heart of Chan” while making tangyuan—on how to press, knead the dough into wraps, drop in the filling, scrunch them into balls, and round them out rolling them between the palms, all with attentiveness and ease. Though most participants already—with rolled up sleeves—eagerly dived in to work with the dough before she began. A savory version of these glutinous rice flour balls was also served up for all to enjoy.

One attendee, Mr. Wu, said he had not made tangyuan for at least 20 years. And he was so pleased to be making them, and to be reminded of the times making them in his childhood. Waiting for the tangyuan to cook, attendees and volunteers played musical instruments, engaged in light aerobics, and puzzled out brainteasers.

To celebrate birthdays for the older pusas as a group, the monastics rolled out a birthday cake. Venerable Zhang Zong explained the way to make a wish. Mr. Liu—aged 94 and the oldest—then happily cut the cake on behalf of the whole group. The venerables also presented souvenirs to each older adult attendee, and wished all a healthy and peaceful new year filled with wisdom.