"Five Blessings at the Door"

Since his inauguration as the sixth DDM’s Abbot President, Venerable Guo Huei launched his first preaching and care-giving tour of North America, travelling from Vancouver to San Francisco to Los Angeles. A public sermon titled “Five Blessings at the Door” was administered at the Pacific Palms Resorts. This speech expounded on how an individual could pursue the states of truth, goodness, beauty, wisdom and belief through the powers of discovery, management, innovation, reasoning and faith. It also explained that by implementing the wisdom of Buddha Dharma, an individual could reach a state of non-self through a process of self-assertion, self-uplifting and self-dissolving, resulting in a life of only doing good deeds and eradicating bad deeds. His talk integrated both worldly ways and Buddha Dharma concepts and inspired more than 300 audiences, including VIP guests Director General Abraham Chu from the Taiwan Economic & Cultural Office in Los Angeles, the Mayor of Monterey Park Hans Liang and Gilbert Gutierrez, Dharma heir of Master Sheng Yen.

The Abbot President stated that human lives are interconnected and influenced by both materialism and spiritualism. The latter is composed of five pillars rooted in areas of science, society, art, philosophy and religion.

Society
Western society tends to value social ethics while Eastern society often focuses on family ethics. For years DDM has been advocating “The Six Ethics of the Mind,” which covers values as they relate to family, daily life, campus, nature, occupation and ethnics. These core values focus on fulfilling one’s societal responsibilities through the observation of principles and the dedication and respect towards others, while always self-reflecting and caring for others with good communication. He concluded that the best management is self-discipline and self-restraint.

Art
When discussing the aspect of art, the Abbot President spoke of the power of innovation and shared his works of calligraphy and Chinese brush paintings along with an impressive improvised self-taught composition on the piano. He encouraged everyone to bring artistic exuberance with lifetime learning and dedication as one pursues the beauty of life.

Philosophy
In the world of philosophy, individuals pursue wisdom through the use of logical reasoning that validates their concepts and guides them along the path of an ideal life. The distinction between philosophy and Buddhism is that the former researches upon causes and effects while the latter penetrates deeper with causes and conditions and generates the wisdom of “Dependent Origination.”

Religion
Finally, as he spoke on the subject of religion, the Abbott President spent a large part of the speech discussing the concepts of existence and time. As people begin to recognize that there is not an unlimited amount of time in life, the power of faith comes from the desire of eternality. Religions in general relate ultimate eternality to beliefs and meditative absorption while Buddhists strive to attain wisdom beyond eternality.

The Abbott President explained that the human perception of an existence of “I” or “self” originates from individual moments of rising and falling thoughts, but we integrate each thought together with the one that preceded it, causing us to perceive that all phenomena are connected and real. He used an analogy of time moving on a clock as an example: each second is individually composed of both stillness and movement but when each second passes from one to the next we perceive them to be interconnected and combined. The perception of “I” or “self” is similar in that it never separates time from space. The Abbott President shared a story of his visit to North America in 2016. He was saddened to see that the once familiar environment now appeared to be different. It took him a few days to adjust from sad thoughts into a still mind, transcending time and space as he dissolved the existence of “I”. It was a humbling experience that showed that interactions are merely rising and falling phenomena and are not real.

The same comparison can be used for the cycles of life, death and illness and the four states of phenomena for the mind: formation, existence, change and void that exist independently on their own. However, we feel emotions because our minds tend to interact with objects and connect them into continuity, consequently falling into a cycle of birth and death. The Abbott President shared the Samatha Verse from Song of Enlightenment by Master Yong Jia, which elaborated on the rising and falling phenomena and how to attain our true nature through the constant practice of awareness: as described in the Heart Sutra, a state of “non-wisdom and non-attainment.” This true mind can be realized through the practice of Huatou, a meditation method that encourages one to ask “what was my original face before my parents gave birth to me?” This theory is used to overthrow one’s self-centeredness, self-consciousness and self-attachment, and move forward from self-affirmation to self-negation. Only by going beyond the duality of subject and object can we call it a true state of meditative absorption.

After the sermon, a luncheon in tribute of the DDM Honorary Directors was held. Members of the fellowship gathered to share their causes of contributions to DDM while vowing to continue their devotion toward all aspects of DDM’s construction, education and activities as they carry on Master Sheng Yen’s compassionate vow to propagate Chinese Buddhism in Western society for future generations. 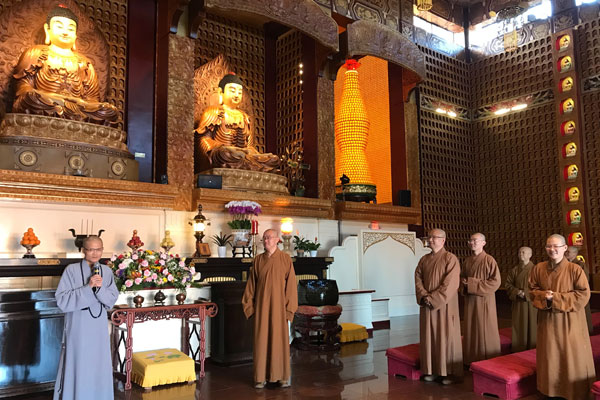 In his itinerary the Abbott President also visited other Buddhist organizations like Tzu Chi’s Foundation Headquarters, Fo Guang Shan Hsi Lai Temple and The University of the West, where he exchanged views regarding Buddhist propagation and education. Along with the acknowledgment of the strengths within each organization, the wisdom of Buddha Dharma can provide a broader scope to benefit society.