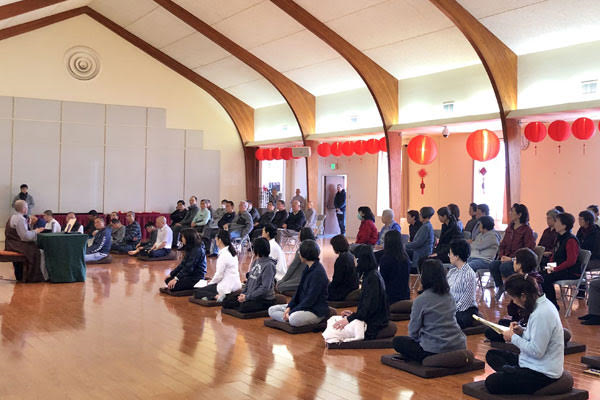 After completing a solitary retreat that lasted six years and two months, Venerable Guo Guang launched a touring Dharma talk from the DDM Los Angeles Chapter to the Chan Meditation Center in New York. The purpose of the tour was to share her cultivation experience as part of her dedication towards devotees during Master Sheng Yen’s 11th anniversary memorial service. She studied the Earlier Buddhism and concluded that Mahayana Buddhism’s three systems, namely the Madhyamika (the Middle Way), the Conscious Only and the Tathagatagarbha, all originate and are developed from the foundation of Dependent Origination: the core thought of Buddhism.

She pointed out Master Sheng Yen devoted his life to promoting and implementing the Dharma Drum Lineage of Chan Buddhism. He anticipated DDM monastic and laypeople would continue this mission to collaborate the lineage and build a bridge between Chan Buddhism and Buddhism of other parts of the world in order to share its teaching with future global Buddhism. She quoted Master Sheng Yen’s vision: “Chinese Buddhism, after being disseminated from India to China, has developed into a precious legacy for human civilization as it fused with its culture and was instilled by our ancestral patriarchs’ investigations and realizations.” This legacy cored in Tathagatagarbha is worthy of sharing with the world for generations to come.

Agama Sutra, the most important sutra in Early Buddhism, is centered upon Dependent Origination as the Buddha’s teaching. Dependent Origination defines a neutral course without allowing oneself to fall into the extremities of existence and nonexistence. The Buddha realized under the Bodhi tree that all phenomena are formed through causes and conditions and are neither formed from a single particle nor from nowhere. Due to the nature of interdependencies, they lack the nature of an absolute self. The idea of "no self" refers to all phenomena existing only through causes and conditions and none arising from a single factor. The three major systems within Mahayana Buddhism are produced from the same concept, yet each has a set of its own unique characteristics.

Madhyamika Thought (The Middle Way): Defines the nature of Dependent Origination as EMPTY by penetrating the Dharma nature because within Dharma nature, one perceives no phenomena that arise from causes and conditions come from a quality of self. Therefore, no phenomena truly exist.

One of the unique functions of Tathagatagarbha's Non-Empty is the “Rising of Nature's Virtue”, which suggest every 1% elimination of ignorance brings a 1% increase of function, and the total eradication of ignorance brings infinite functions. Essentially, this function is compared to the Nirvana Wisdom in the Agama Sutra, the Fundamental Wisdom in the Nirvana system and the Four Wisdoms in the Consciousness-Only.

Tathagatagarba points out that all sentient beings inherently have virtuous nature like the Buddha. However, we fail to obtain enlightenment because of our afflictions. This teaching brings incentives and confidence for practitioners to strive towards the eradication of vexations. We are all Bodhisattvas and Buddhas when we eliminate our ignorance. In this sense we should be respectful towards one another and strive when we encounter harsh conditions.

Another symbolic sutra representing the Tathagatagarbha called “The Awakening of Mahayana Faith” described: "All sentient beings are primordially unaware and constantly adhere to deluded thoughts." The key to lift the cycle of living and dying lies in cutting off the continuity of deluded thoughts. This practice should be initiated from the concentration of our true essence guided under No Form, No Thought, None discrimination. However, it is not to be confused with denying the existence of world phenomenon and thoughts. The nondiscrimination is based on the actual understanding of non-subjective and non-self within our true Buddha nature.

Agama sutra emphasizes the importance of moment-to-moment righteous thought to contemplate the Buddha’s teachings with real practice so that we can perceive impermanence and non-self. As we remove our erroneous subjective views, ignorance and greed, we are able to realize nirvana. Tathagatagarbha’s righteous thought directly points towards Buddha nature. The Empty and Non-Empty Tathagatagarbha fundamentally connect with practice of the Early Buddhism’s core teaching of Conditioned Arising non-self: that one is aiming towards reaching Nirvana while the other is realizing true Buddha nature. The only difference is the Tathagatagarbha has its own unique methods on the investigation of doctrines and the realization of practice.

Venerable used an analogy of quadrupled trees grown from the same original roots of Dependent Origination to describe the relationship between Early Buddhism and the Mahayana Three Systems: the trees interconnect with one another and interweave into one aroma called liberation, and therefore fully explicit the Buddha’s teaching which is truthful, kind, and beautiful.

Venerable emphasized the importance of setting regulated practice of cultivation, which is best achieved by adding continual practices little by little. Results may not seem evident during the process but with persistence we can prevent ourselves from falling out. If our daily schedule is hectic, we should minimize the duration but not cease the practice. In the Agama Sutra the Buddha taught his disciples to be more than just followers and to strive to gain Buddha's perception about the truth of life: that we are all dependent originations, impermanent, and without a character of “I.” We, as practitioners, should learn to perceive through the Buddha’s eyes. Do not gain attachment to lightness, or the feelings of calmness and comfort while doing sitting meditations because they are merely sensations. Always step up to connect the wisdom of emptiness and remember that this emptiness is not about sensations but rather about righteous perceptions. The watershed to distinguish whether pure or impure in Buddhist practice lies in whether one perceives or realizes emptiness which is associated with the non-subjective “I.” It is the greatest driving force for practitioners to thrive from this foundation of impartiality between the mind and the perception of emptiness.

Again, bear in mind we all have Tathagatagarbha. When we are faced with adversity

, we can repent and apply the Dharma as a means to examine our thoughts, speech and actions, enabling us to come back to the fact that our Buddha nature is pure but simply presently entangled by ignorance. Righteous actions beget good karmas whereas flawed actions beget bad karmas. When faced with bad retributions, we should repent and work harder towards good deeds. With good attributions, we should embrace our affinities with gratitude and continue with virtuous actions. With a positive attitude, we should move towards happiness when we face difficulties instead of placing blame or taking our spite out on others because it will only bring us cyclic sufferings.

Venerable concisely summarized the core thoughts and characteristics of Agama Sutra and the three systems of Mahayana Buddhism. Tathagatagarbha is the ultimate method based on Dharma nature of Dependent Origination (the Buddha’s teachings) which should not be associated with the self-centered Brahman’s thoughts as it is neither an expedient method nor a theology. It is so significant to share the meaning of the Dharma Drum Lineage of Chan Buddhism at Master Sheng Yen’s memorial because the teachings are capable of bringing us the power of calming our minds in order to lead us to an ultimate liberation.